Get to know me!

Born in Butler, Pennsylvania, a suburb of Pittsburgh, Lisa Jennings felt she and her family were nomads. There were numerous moves during her childhood. From Butler, PA they moved to a mansion in Roanoke, Virginia, once part of the underground railroad during the Civil War, to Syracuse, NY, East Aurora, NY and then Hastings, Minnesota, by the age of 15 her family finally chose Nashville, Tennessee to call home. In each place where her family lived they explored the history, experienced the music and arts as part of her upbringing from parents oriented to experiencing life rather than the things she could attain.

As a young girl, Lisa’s family lived the longest in East Aurora, NY where her first roots in art took hold. Riding bikes around their idyllic hometown, climbing trees and digging clay with her brothers and friends for her mother’s ceramic work. Lisa’s mother showed her young family how to hunt stones, fossils and wood which they used for different art projects. One of Lisa’s first memories was going to the library to read books on American Indians, fueling an enduring interest in ancient cultures, a passionate theme in her primitive/ organic work. Lisa’s mother, a ceramic and textile design major at Alfred State University, NY, created a variety of art work and art experiences throughout Lisa’s childhood. Lisa’s father, was also a talented creative person his entire life. Having majored in music and English literature, Mr. Jennings played the French horn, sang and composed sacred music and lyrics, as well as writing news paper columns for local publications. Both parents were active in founding art organizations and in serving their community. The creative endeavors of her parents is an obvious influence. Lisa studied art throughout high school in Nashville, graduating an art honors student from Dupont Senior High in Hermitage, Tennessee. After high school she worked full time while also attending school full time, first in graphic design at Nashville State Tech and then Nossi School of Art. Lisa added to her artistic skills and experience, weekend intensive workshops in pastel and watercolor classes at Farm House Artists in Townsend, Tennessee. In 1988, Lisa began a ten year career with Nashville Electrographics. She took a color differential tile test which proved her eyes were keen to color pre-press work, where she learned how to etch silver off of film to make color adjustments, a highly revered skill set at the time in the printing industry. While there she earned her lithography masters card.

On a summer afternoon driving into her twelve hour night shift at the Pre-Press plant in 1997 Lisa had an immediate spiritual awakening and realization that it was time to leave the printing industry behind for her longing to be an artist. The one thing she knew that being an artist was her calling ever since she can remember as a young girl. One year later, she left behind her demanding career, taking the risk to make her way as an independent visual artist. 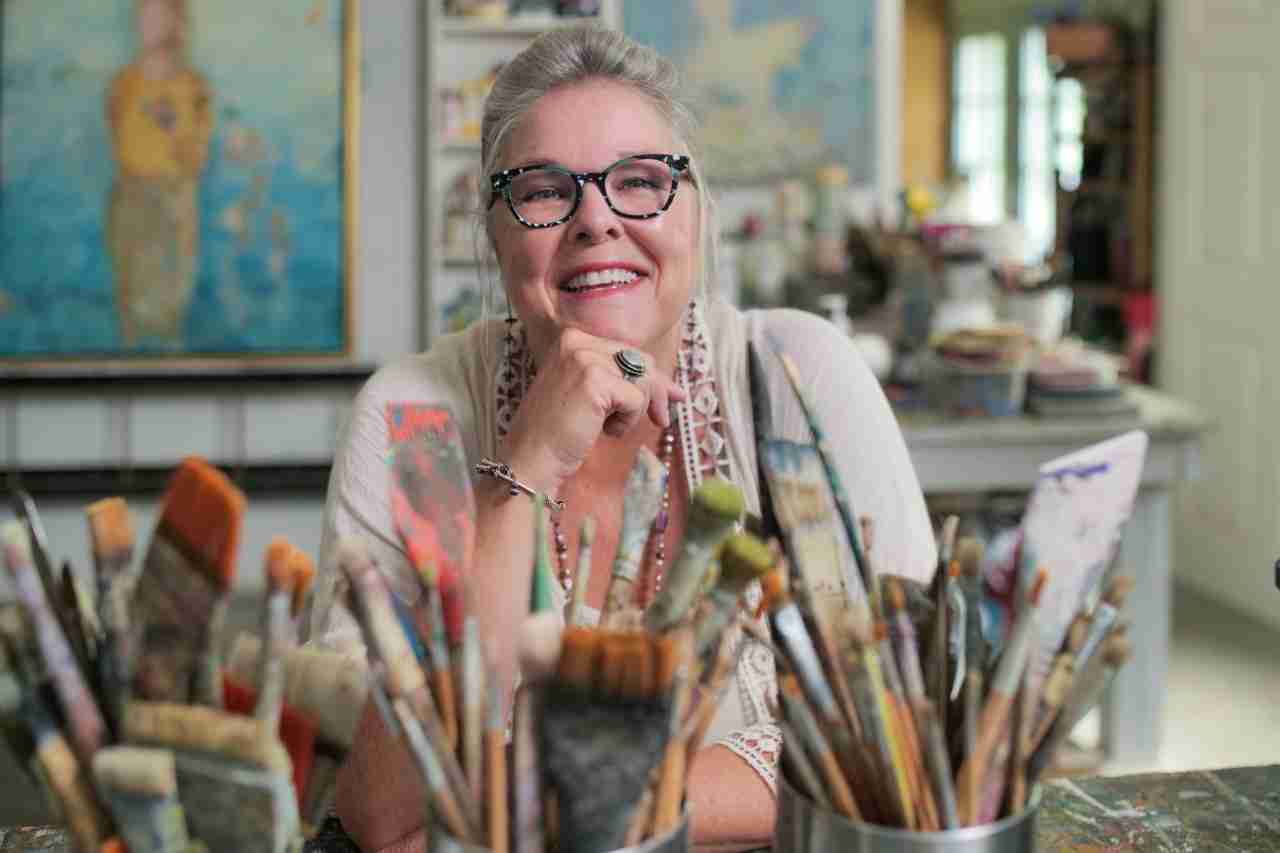 Six months later, Lisa met her mentor and experienced the most significant turning point in her career to date. Lisa shares that this is where the bulk of her training came from. She attributes 80% of the artist she is today to what Anton Weiss saw in her. Anton allowed Lisa to explore and express what was the beginning foundation of her art career. The very first things Lisa ever created and sold in her early professional career were made of the hand made papers she loved and liquid acrylics on watercolor paper. In the past 22 plus years Lisa has explored and learned in depth from Anton Weiss how to sculpt in stone, wood and welding. Weiss so famous for his non-objective energy that he learned from Hans Hofman shared in turn with Lisa. To this day she uses this theory for the foundation process of creating chaos in her pigmented papers and then the organization of them applied to canvas in her paintings. On a trip with Anton Weiss, both participating as artists in Art Santa Fe, the two explored a national park in Albuquerque, New Mexico viewing stone etchings by native American Indians. Lisa purchased a book of photography of these inspiring etchings and ochre paintings that are throughout the South West. This one book is the foundation of the passion for her layered textural paintings and her early stone sculptures. From the book, she studied the color palettes of the ochres and etchings on stone walls first created by aboriginals, there began development of the stone-like layering process, the recognizable trademark in both her sculptures and paintings today. From the growth and knowledge instilled in her Lisa has created her own style of painting with pigmented papers and her unique sculpture that links the primitive organic designs that are in both of her two and three dimensional works. Coming from a family that served in the community Lisa has developed her own teaching style with the painted journal as a form of healing work through keeping another kind of journal with mixed media and paint rather than the written word. She continues to share and teach where she is called to give forward in her community.

Current subject matter for Lisa’s work is reflective of her place on her life’s path digging deep from the well of life’s experiences. Lisa built her dream studio in 2014 where she is able to sculpt, paint and teach behind her home in West Nashville. She resides near places where she can forage and walk in woods near by. Her many trips abroad to Ireland, Morocco, Mexico and Australia to learn about the early cultures of those places have nourished her quest for knowledge and another source of inspiration to create from. Many of her trips abroad she has used her painted journal to teach and record trips with fellow travelers as a way to record ideas for future body of works. Lisa’s work has been placed in museums, major corporate and private collections throughout the United States, Ireland, Morocco and Australia. Her CV reflects the constant commitment to her career with many articles and publications on her achievements throughout her career.